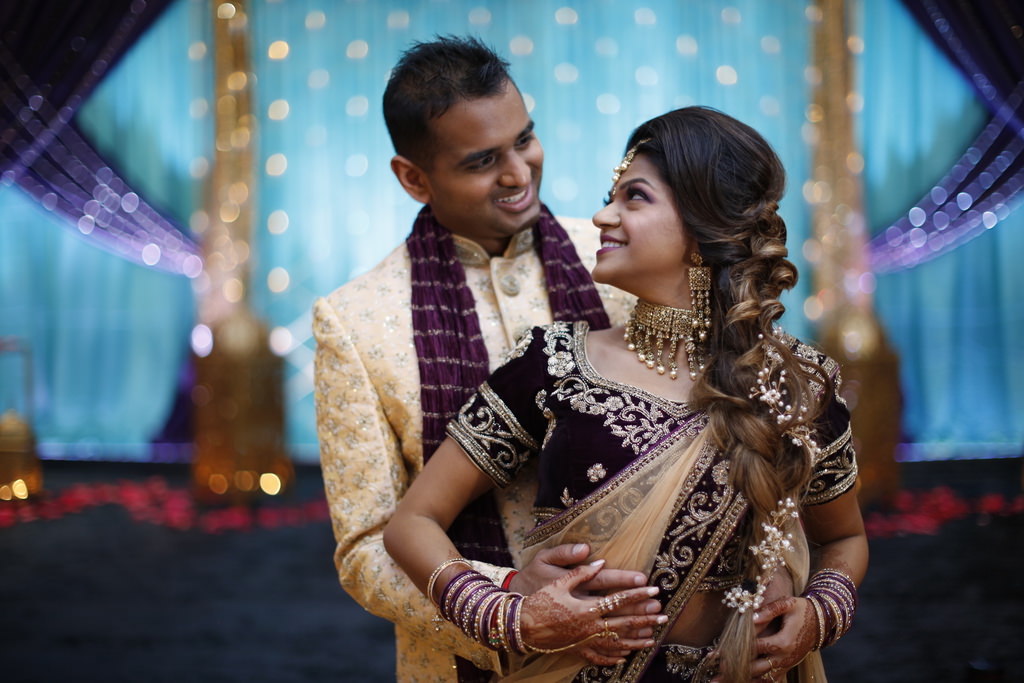 Avani and Naresh's Tampa Indian wedding combined colorful decor and traditional elements for their lavish three-day affair. Sharing aspects of their heritage with their 500 guests was of the utmost importance for the Tampa bride and groom.

“We wanted blush and gold as the colors for the wedding theme because those are popular colors for Indian weddings. They are pretty and ‘in.' Avani wanted the wedding outfit to be traditional red,” the groom explained.

The first night of festivities at the Sangeet included teal, purple, and gold decor, henna artists, speeches, live singers, and dance performances by the bride and groom and their close friends.

“I choreographed multiple jaw-dropping dances with Avani and gave a speech with supporting slideshow that one person called “the greatest wedding speech given by a groom in the history of weddings,'” Naresh joked. “Multiple people have requested access to this video of the speech. It will release next month.”

The couple ended the night with Dandiya Raas Garba, the traditional folk dance form of Gujarat.

The next day kicked off with the Baraat, a lively entrance by the groom, which included drummers and an energetic dance parade by the groom's close family and friends.

“We were surprised at the feedback we got regarding the joint priests. The two priests worked amazingly with their teams (we had an additional three or four priests reading the Shastras), the DJ, and the thavil, shehnai, and nadaswaram musicians. You could truly feel holy vibrations during the auspicious muhurtham,” the groom beamed.

“Michele, owner of Michele Renee The Studio, is a great friend of ours for many years. Her hair and makeup were phenomenal as usual. We can’t recommend her and her company enough! Michele brought her team and family to participate in our festivities. They did an excellent job and had the goal of delivering superior service,” Avani beamed. “It’s not just the women who benefited from her team’s work. Naresh had multiple last-minute issues that she was able to cover-up to make him look slick.”

As the ballroom was transitioned from a vibrant Indian wedding ceremony space to a romantic, blush and gold reception with tall elegant centerpieces and branches dripping in crystals for the third day of events, the bride incorporated a personal touch for the guests.

“Avani made a slideshow that was running throughout the reception backdrop,” the groom shared. “It was very nice to see everyone, friends and family, coming from all around the world to celebrate under one roof. 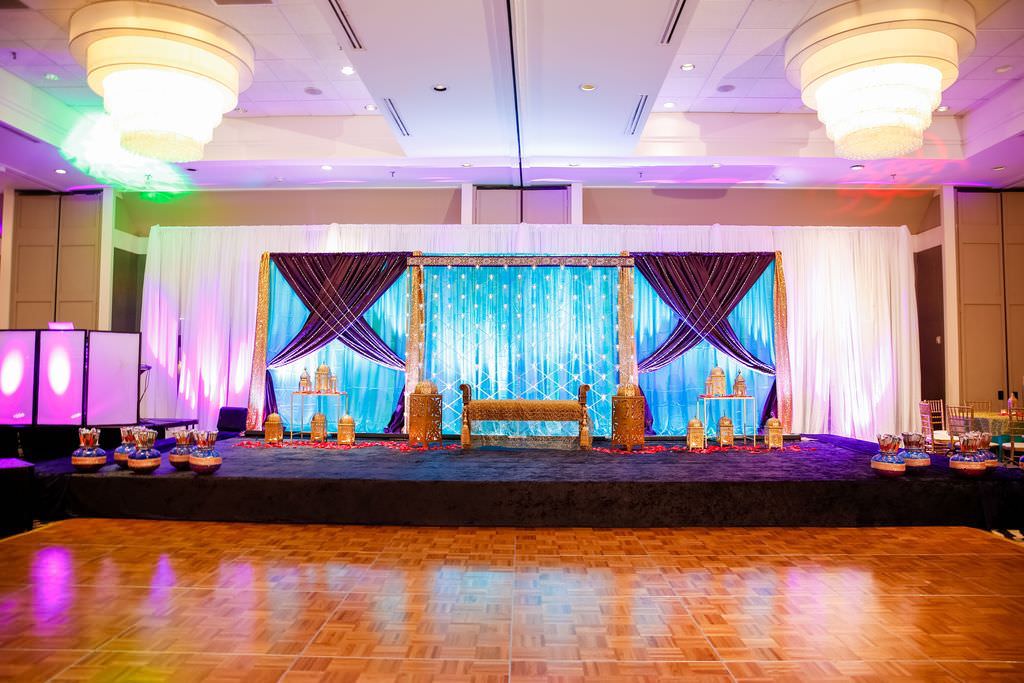 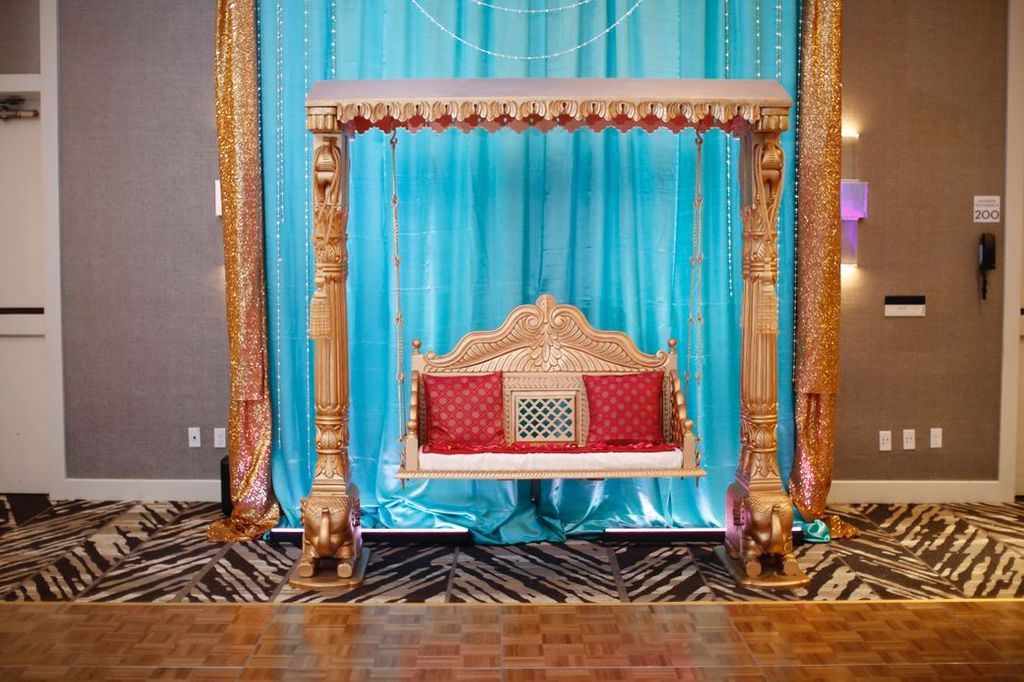 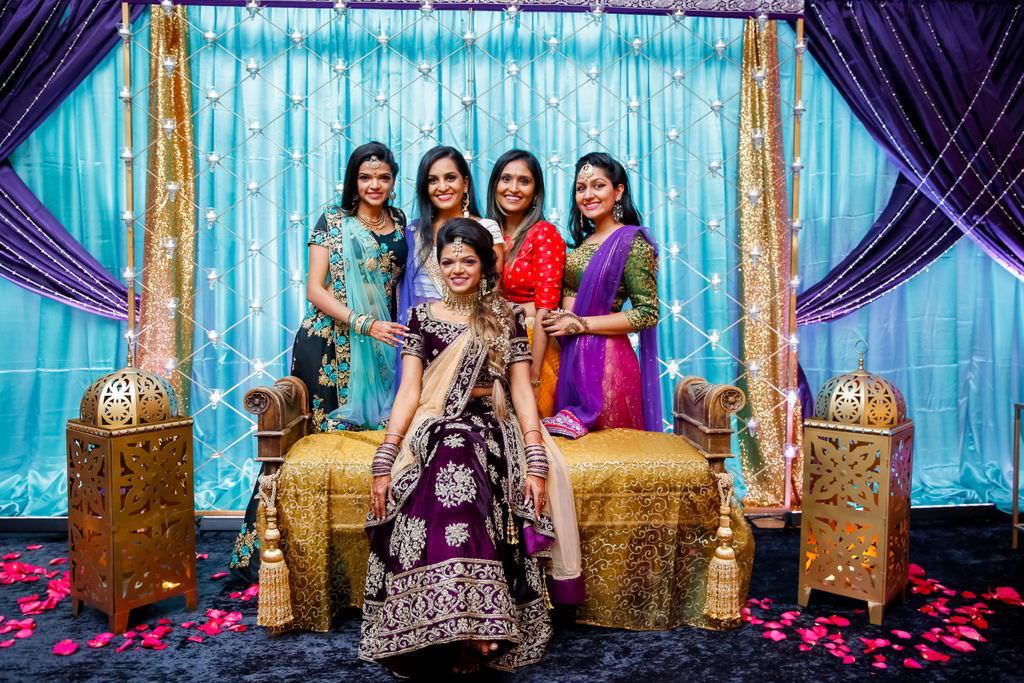 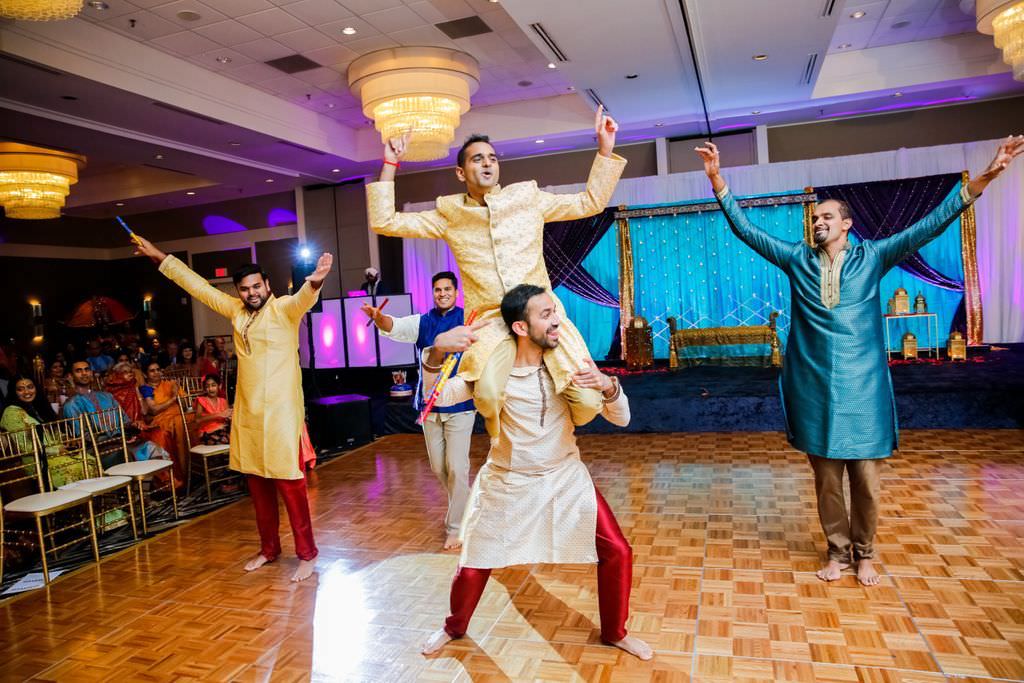 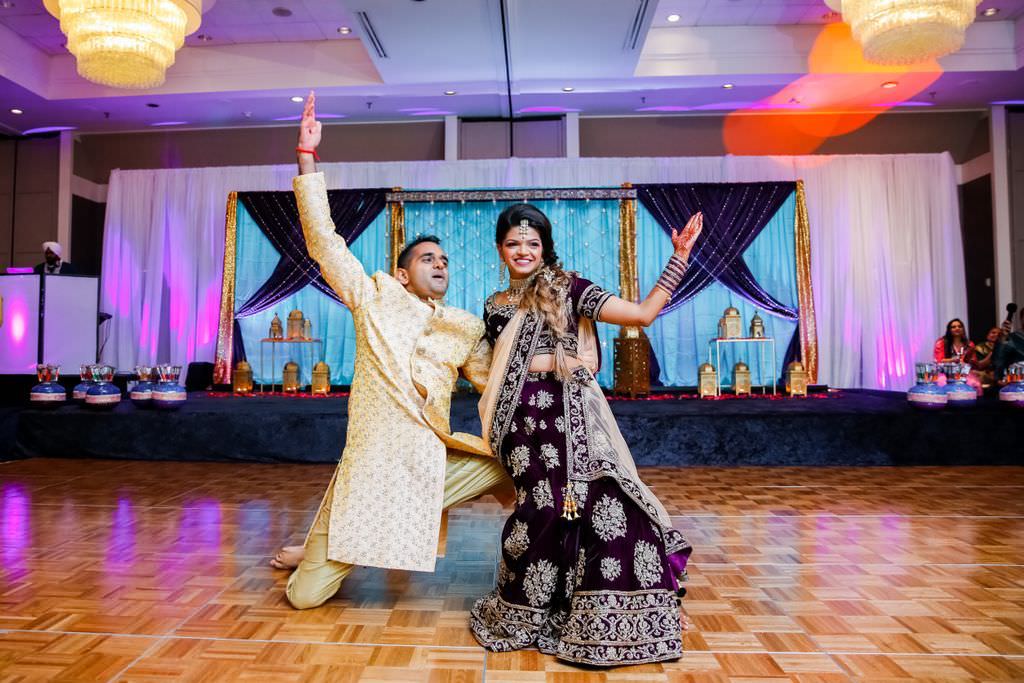 The Proposal:
Weeks before the proposal day, my friend sent an email invitation for my birthday party at the top of the Aloft hotel in downtown Tampa. Coincidentally, on the same day as the party, a different friend of ours, Michele Renee, who owns Michele Renee The Studio and did hair and makeup for our wedding weekend, invited Avani to participate as an “Indian model” during training for her new artists. We decided to meet at the Aloft hotel for my birthday after Avani’s beauty session.

On her way to the hotel, I called Avani telling her that a guy at the entrance would lead her to a special location for the occasion. When Avani arrived at the front, she found it odd to be met by a photographer. She followed the photographer up to the top floor of the hotel. As soon as she opened the door to the penthouse, she knew there was no birthday party. The room was filled with red balloons, hearts, roses, candles, and her favorite Ferrero Rocher chocolates.

The photographer had Avani sit down to watch a video filled with sweet messages recorded by our families and photos of them together. Halfway through the video, Avani was confused why she was watching this alone while the photographer was snapping pictures of her reactions. She legitimately thought I was late to my own proposal! She couldn't even concentrate on the video because she kept gazing around the penthouse for me, but at the end of the video, I told Avani to come out to the balcony.

She followed a trail of roses where I was on one knee in a heart-shaped bed of petals bordered by candles. I said a few words about how it had been exactly 364 days from the day we first met and how my life had completely changed for the better.

But it didn't end there…

After an immediate photo session with the photographer around Tampa's Riverwalk, we returned to the penthouse, where about 30 of our close family and friends secretly gathered for a surprise engagement celebration! This was actually more of a surprise than the proposal! Some families drove or flew in from out of town. Other friends FaceTimed into the event. It was an eventful night of dinner, drinks, dessert, and love. 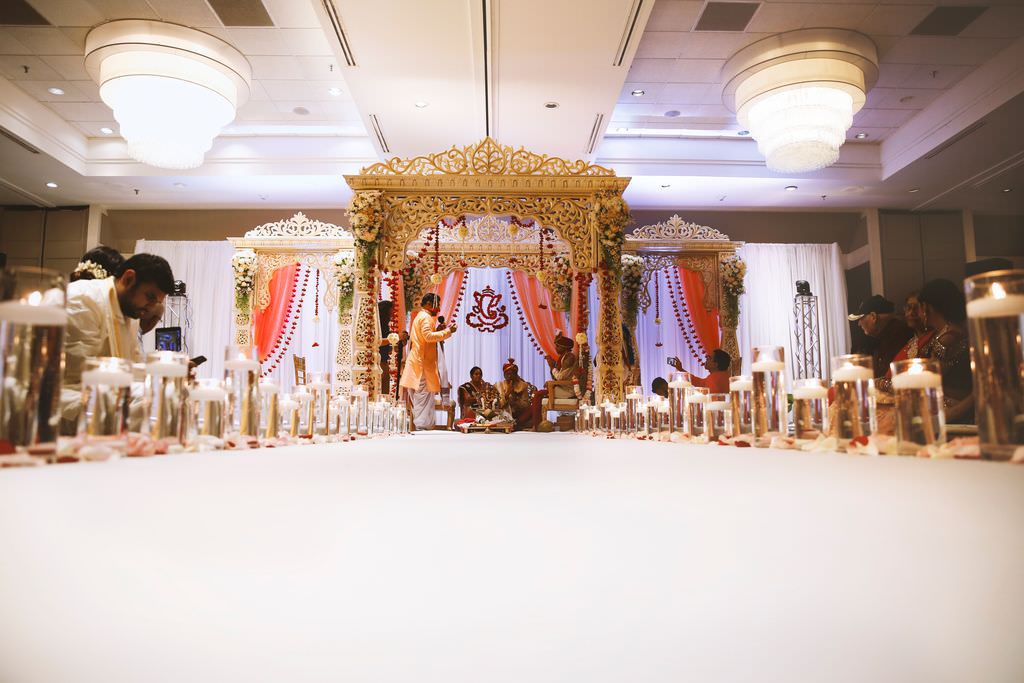 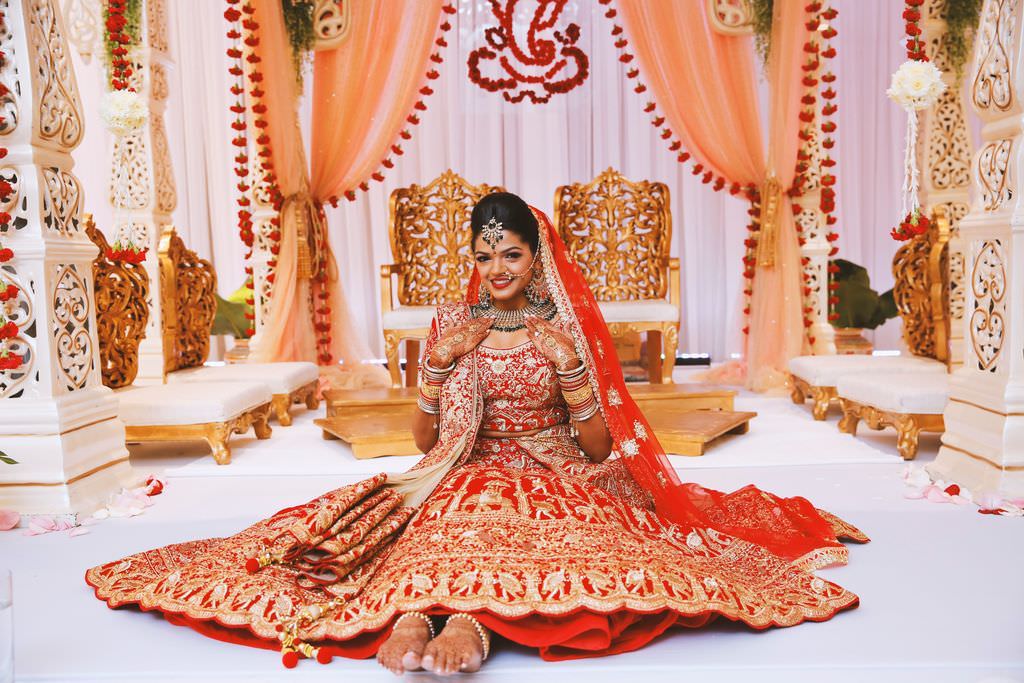 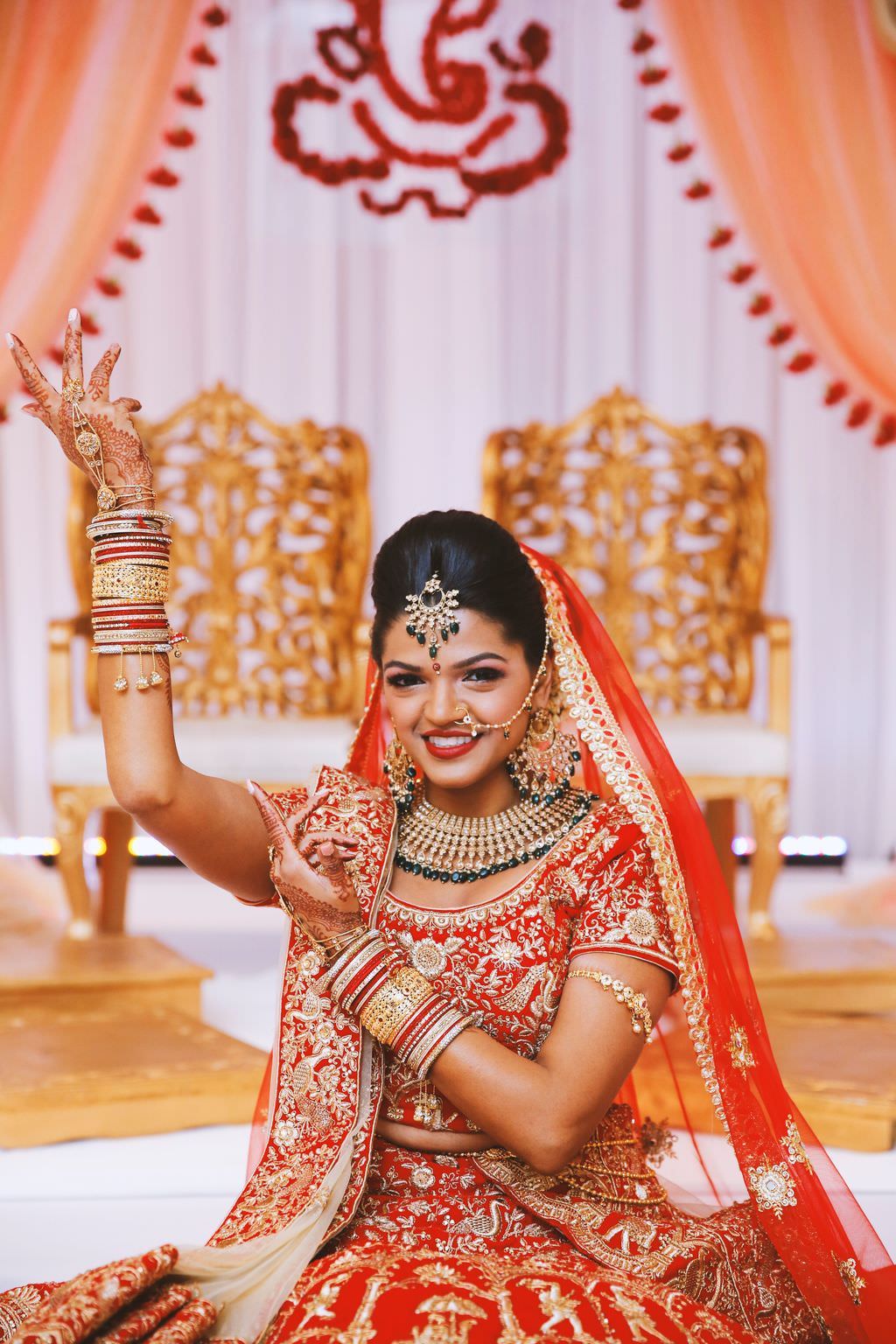 What was your wedding beauty inspiration?
Michele, the owner of Michele Renee The Studio, is a great friend of ours for many years. Her hair and makeup were phenomenal as usual. We can’t recommend her and her company enough! Michele brought her team and family to participate in our festivities. They did an excellent job and had the goal of delivering superior service. It’s not just the women who benefited from her team’s work. Naresh had multiple last-minute issues that she was able to cover-up to make him look slick. 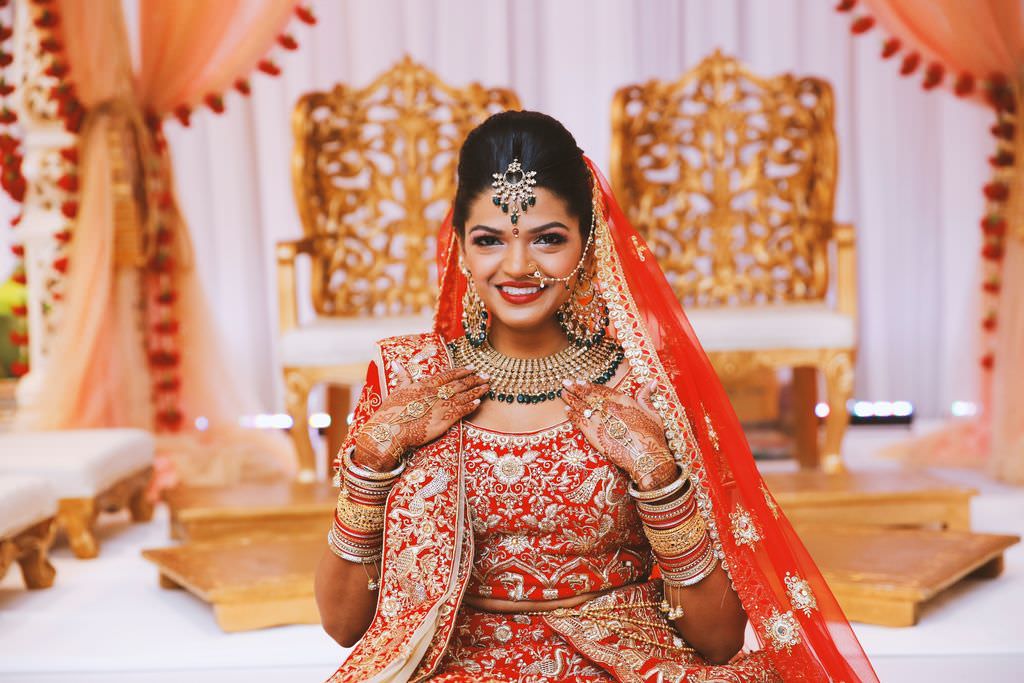 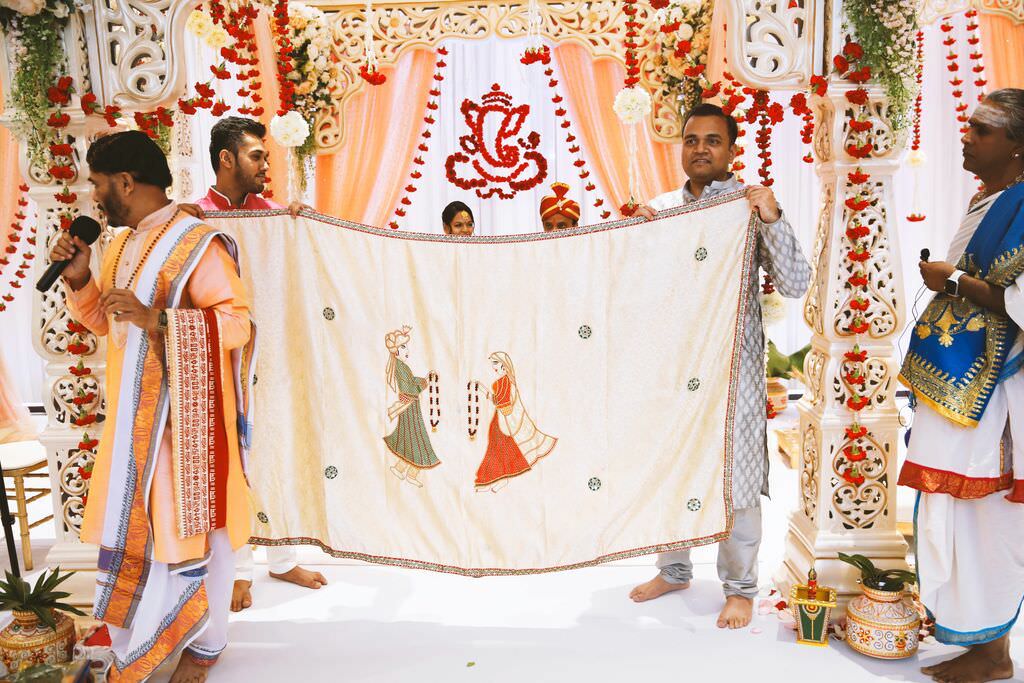 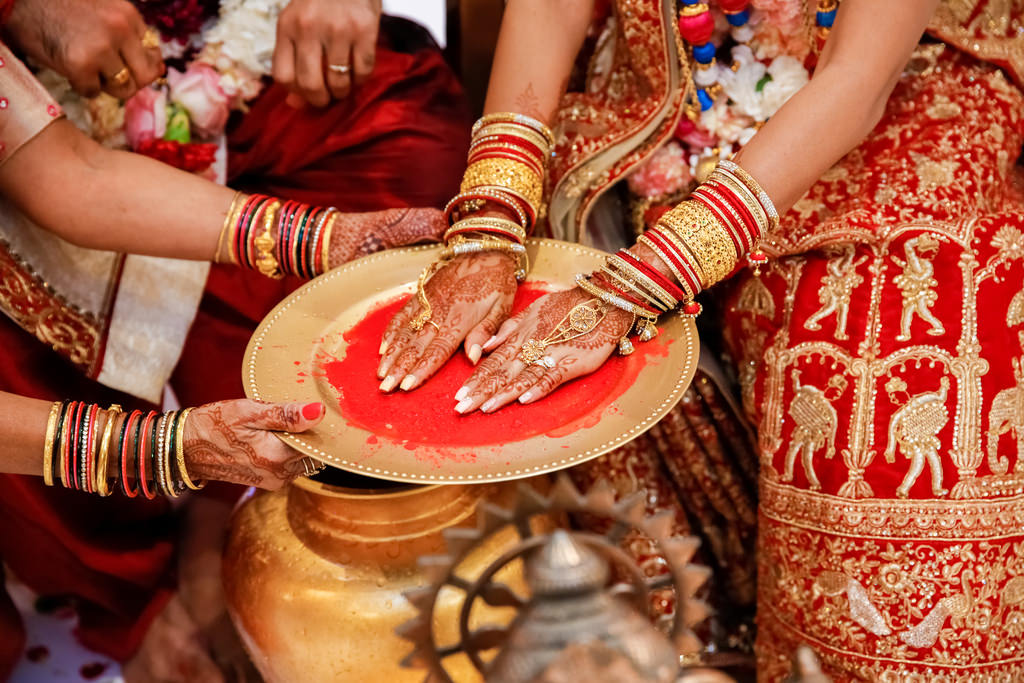 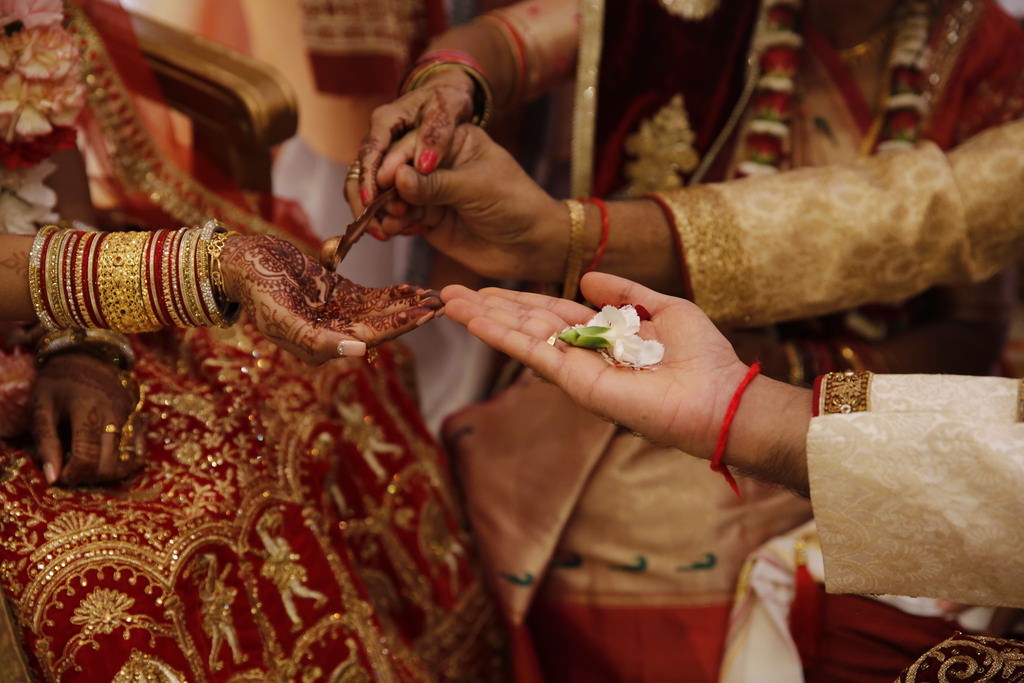 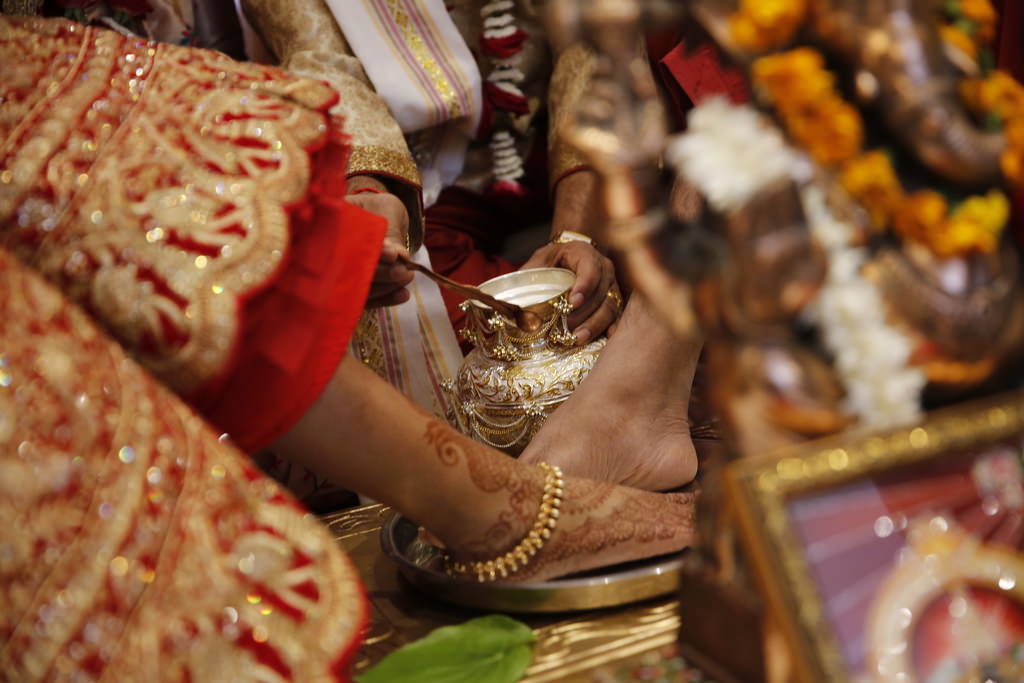 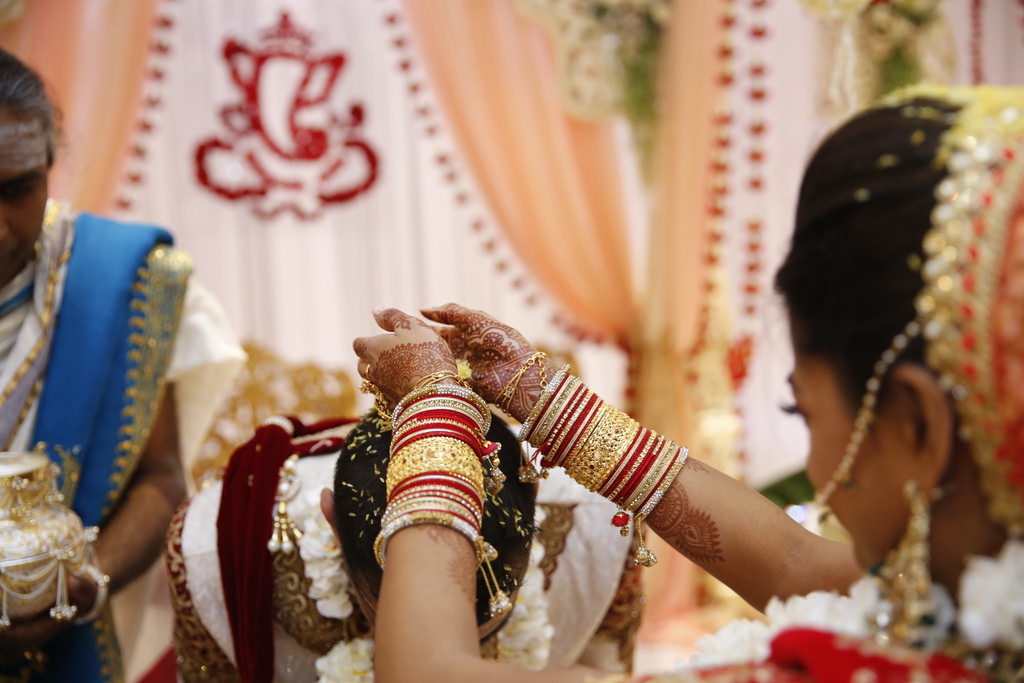 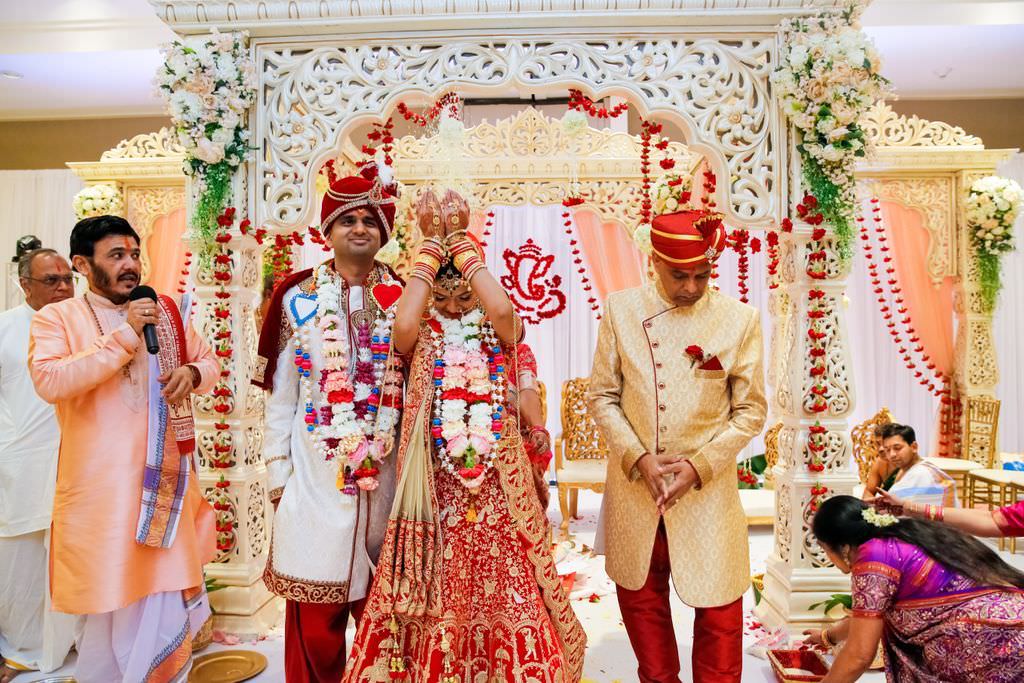 How would you describe your theme/wedding design inspiration?
Our event coordinator did a fabulous job executing on our vision of a Jodha Akbar mandap with fresh flowers. The wedding ceremony took place inside our hotel venue’s ballroom. The mandap was beautiful with fresh flowers, candles, votives, entry ramp, etc.

What were your colors?
We wanted blush and gold as the colors for the wedding theme because those are popular colors for Indian weddings. They are pretty and “in.” Avani wanted the wedding outfit to be traditional red. 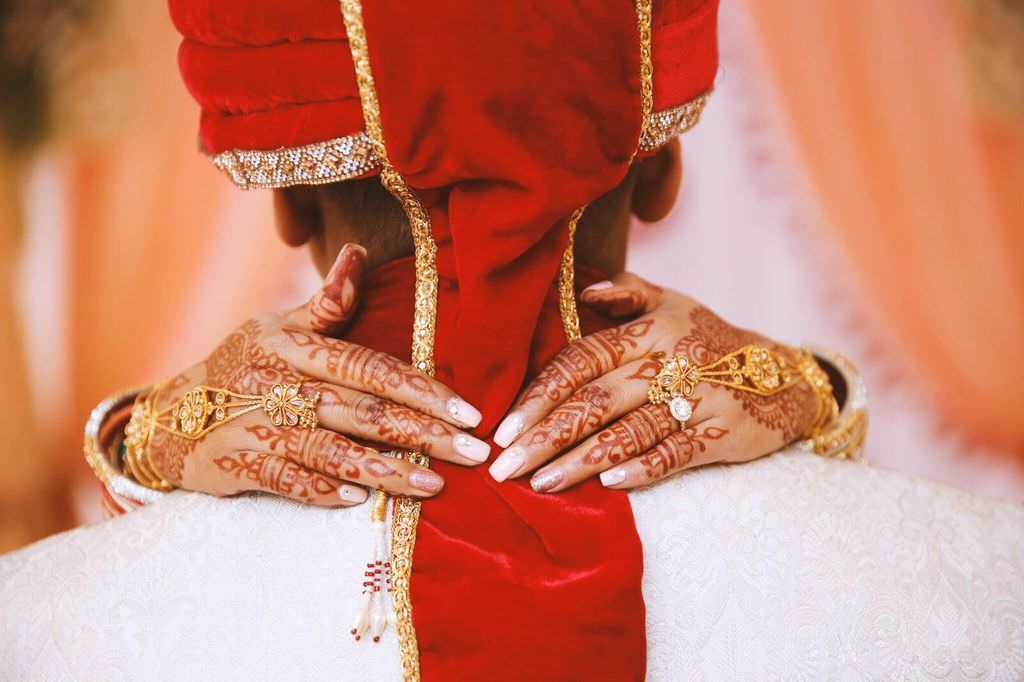 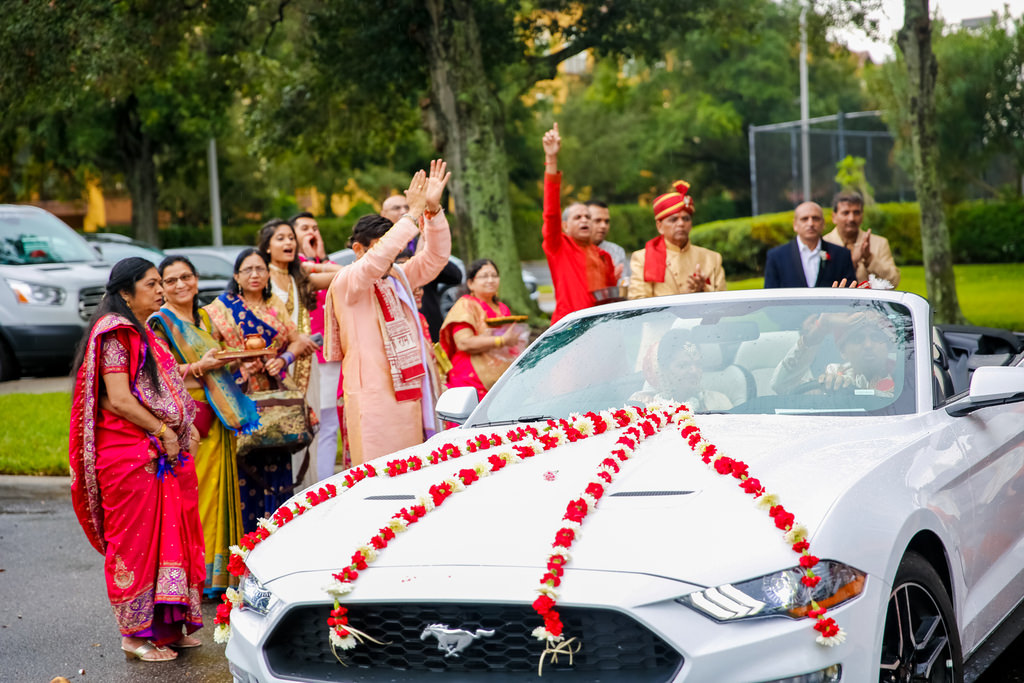 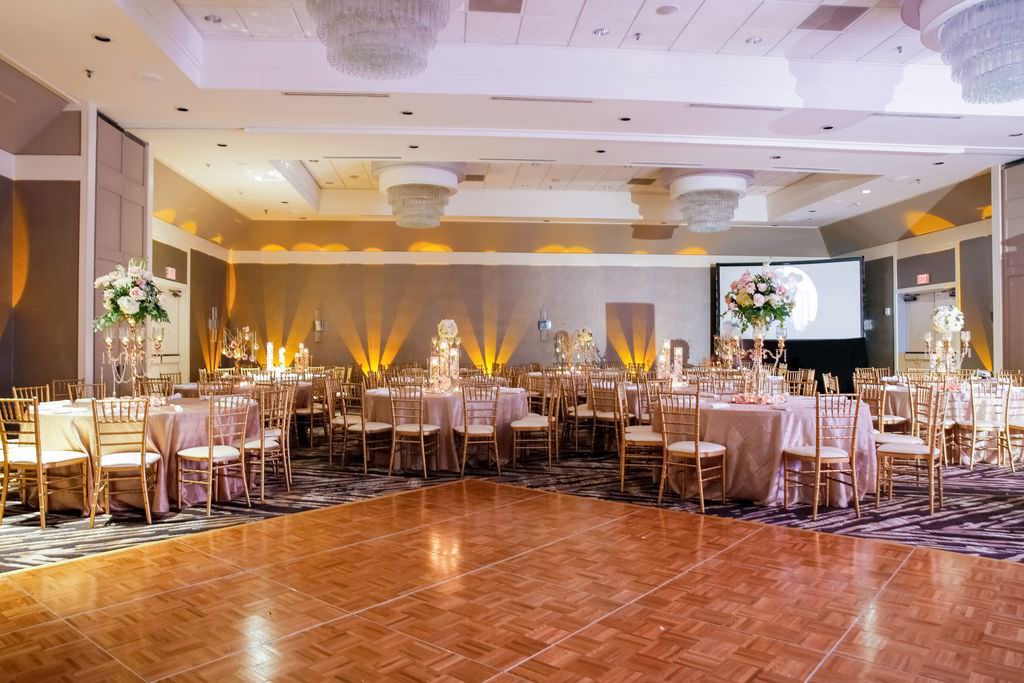 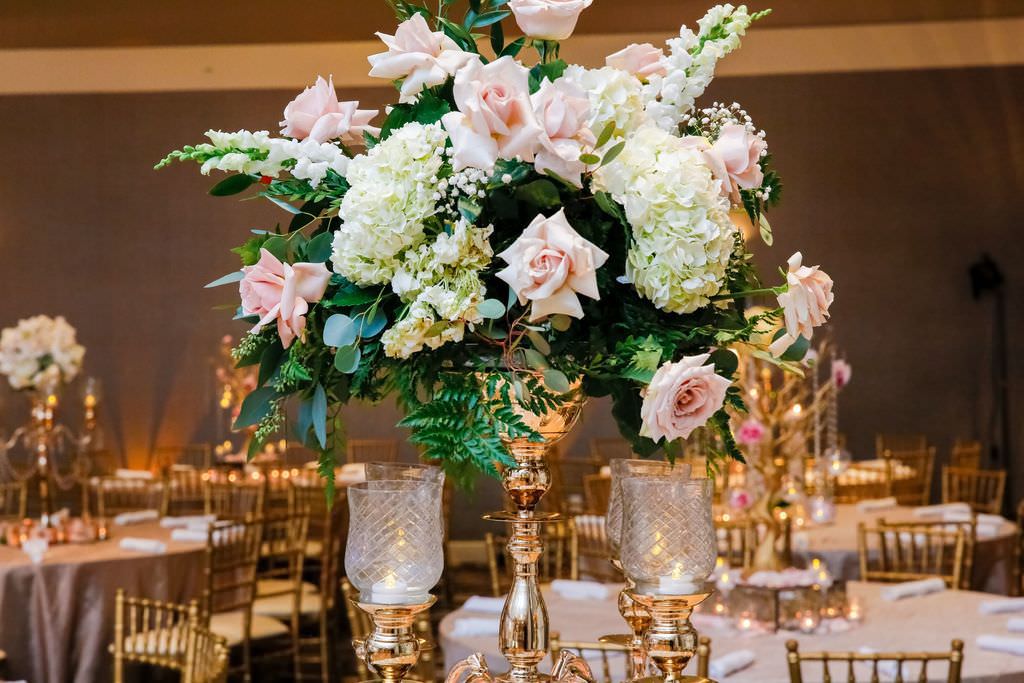 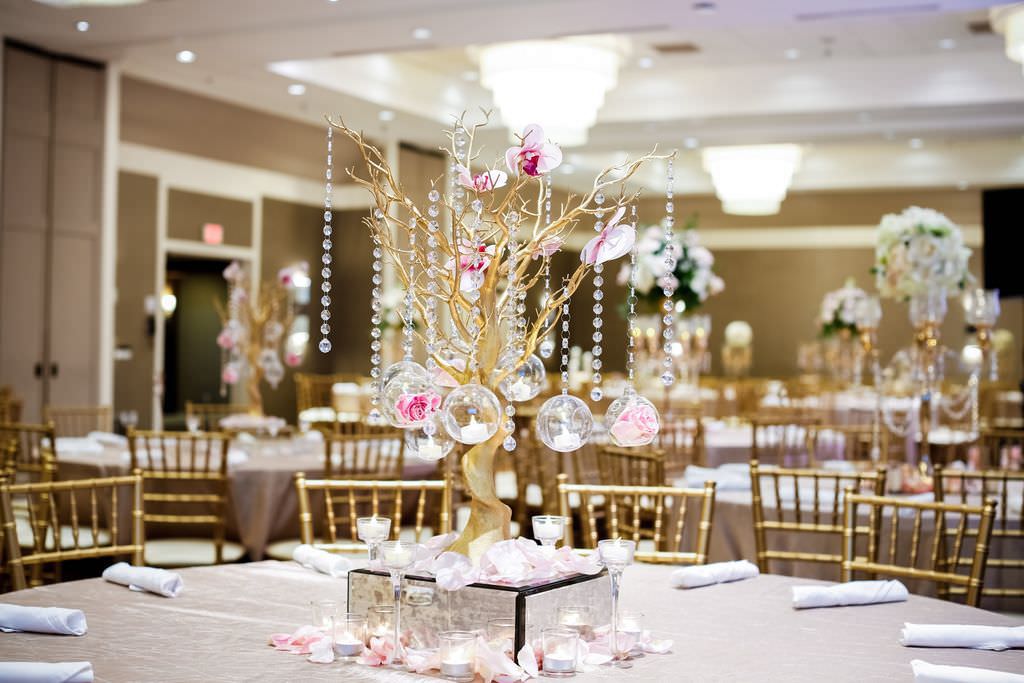 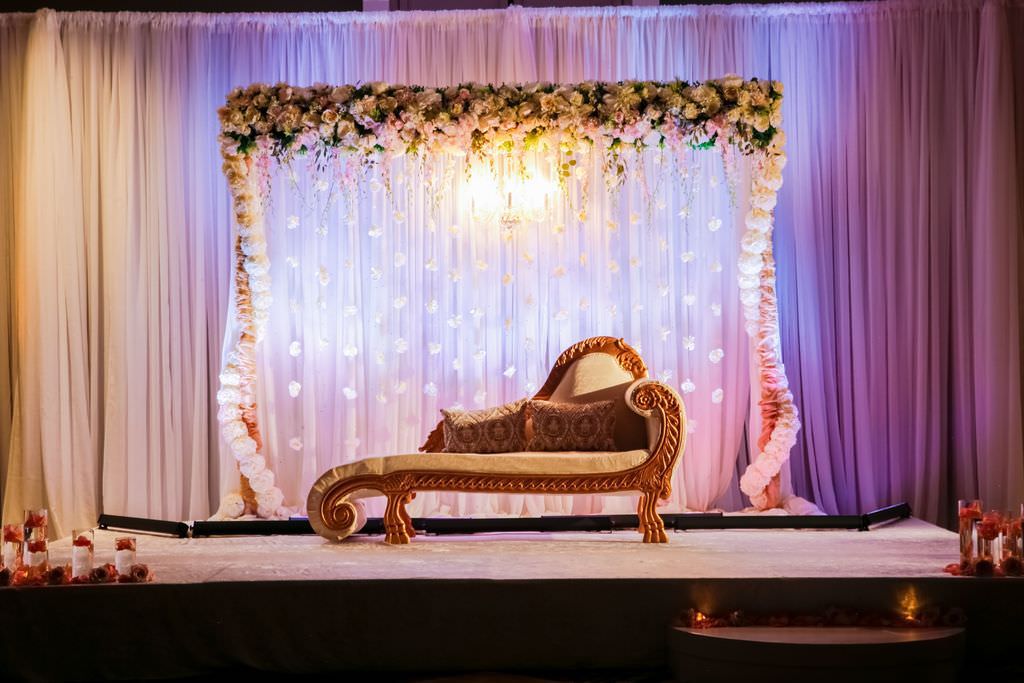 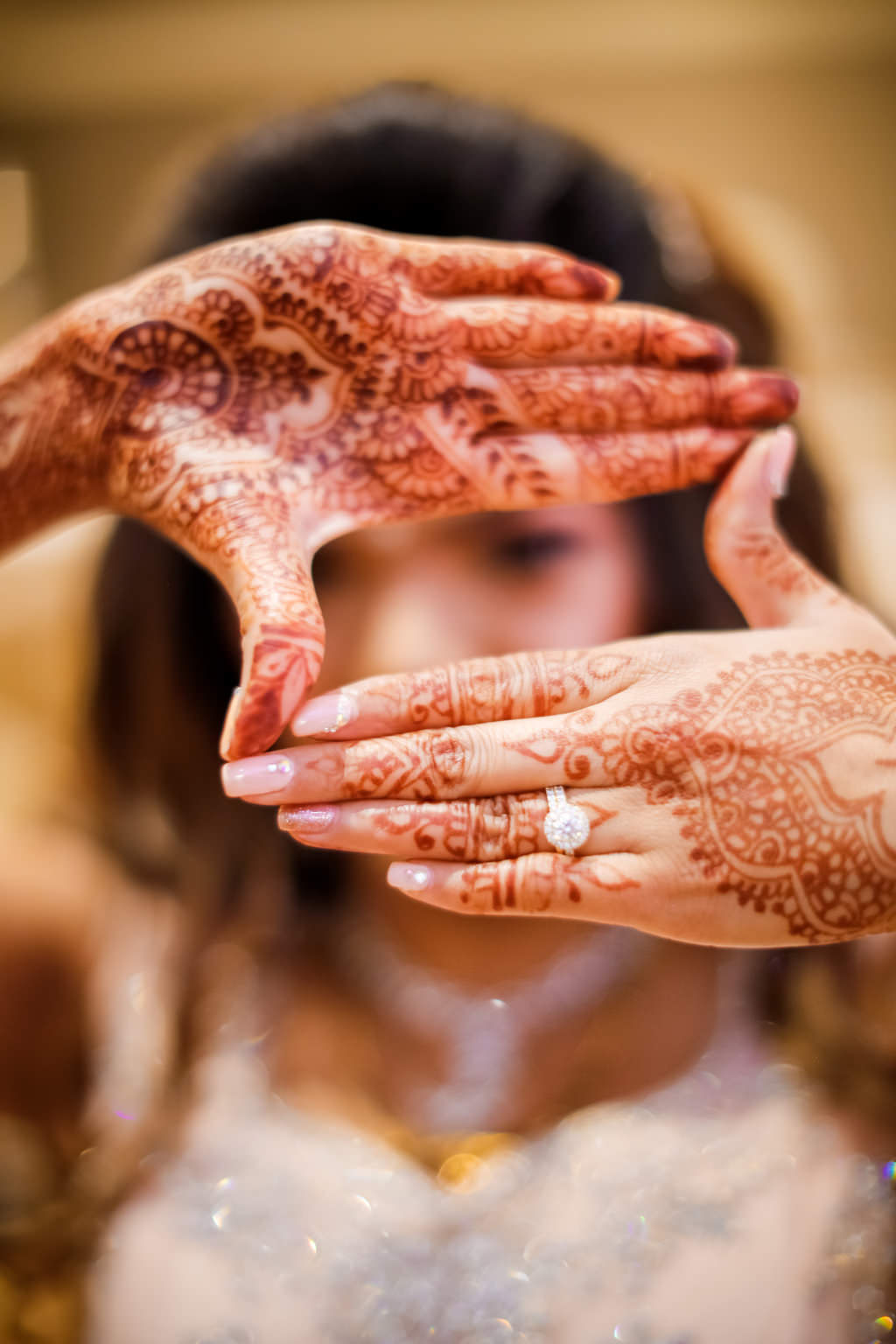 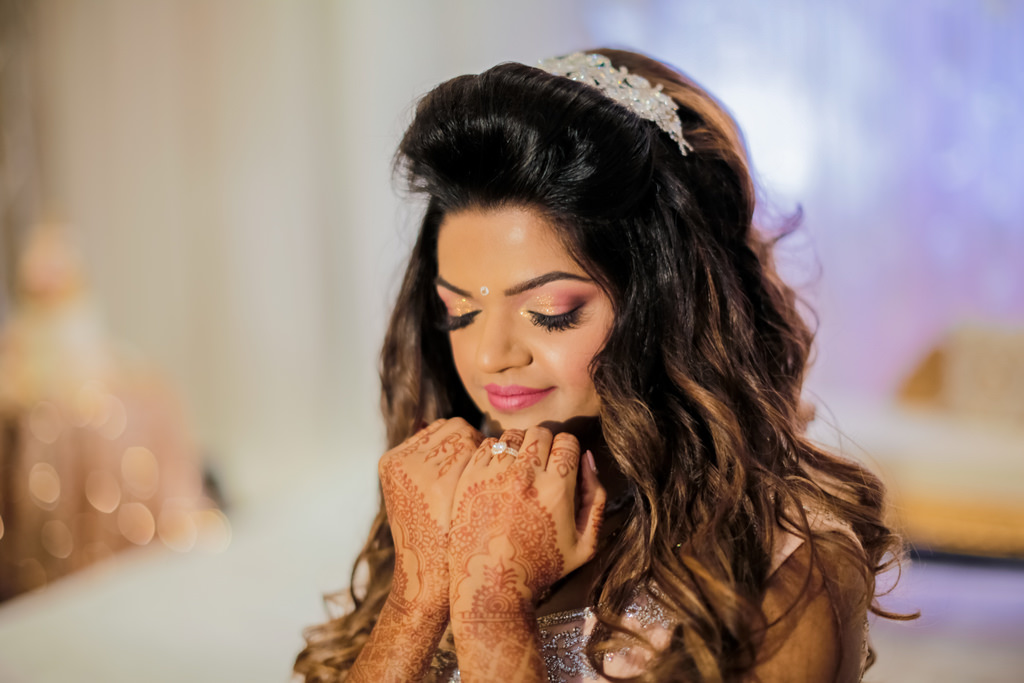 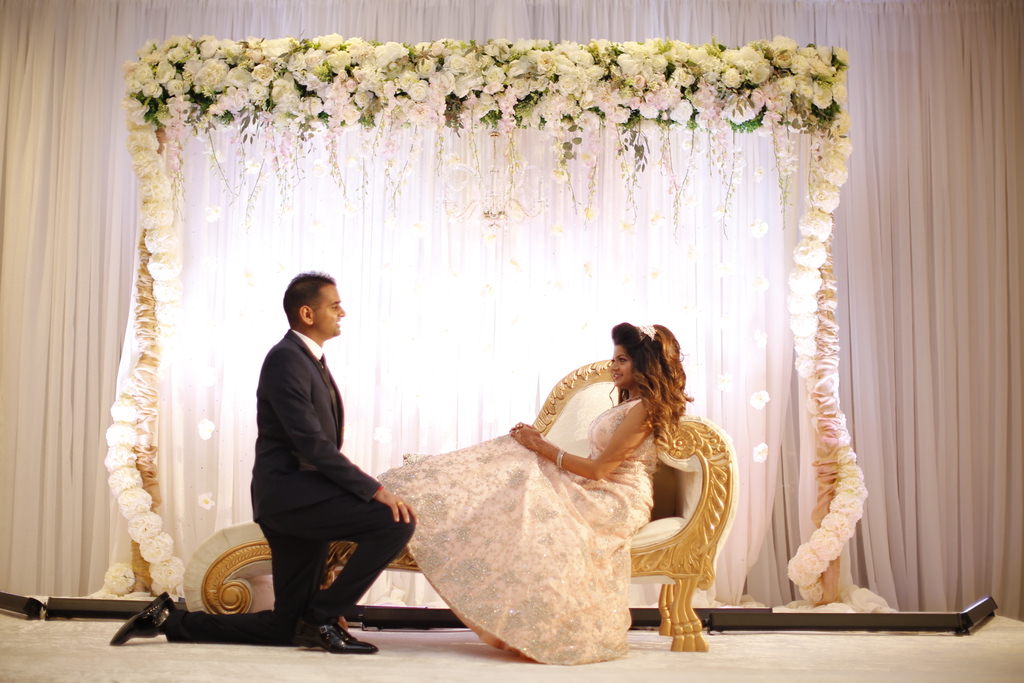 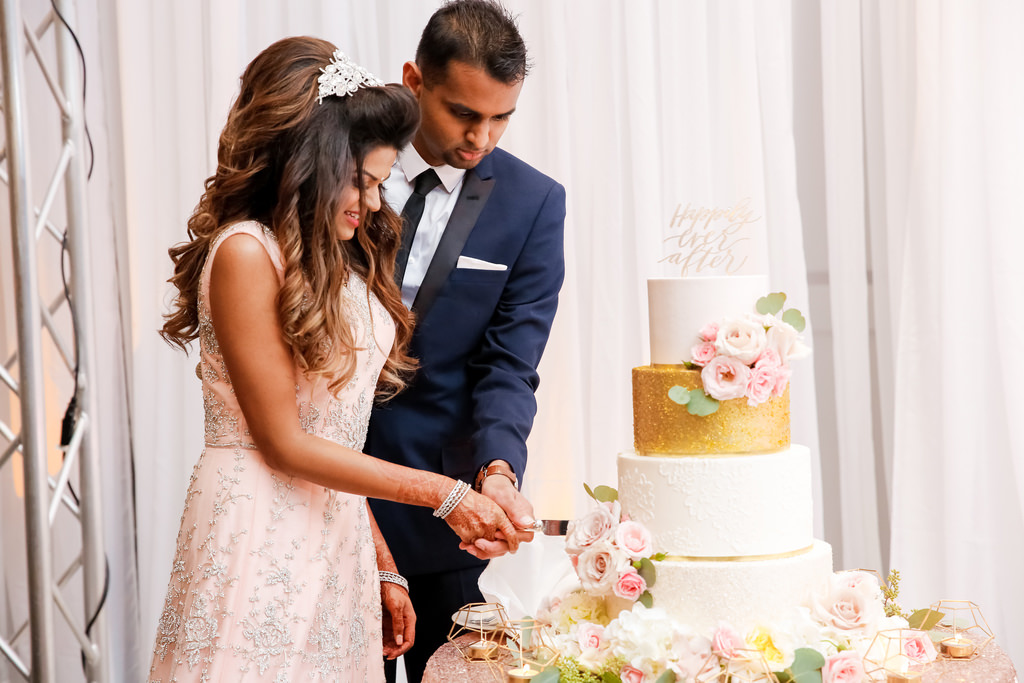 What advice would you give to other Tampa Bay couples?
We tried to do some of our own décor items, and we ended up not using them. We recommend not doing your own decorations. Spend the money to get a professional company to do it all. Don’t do anything yourself.

Estimate that the liquor tab will cover your entire food and beverage minimum (assuming you’ll have liquor at your Sangeet and wedding).

Don’t get stressed out over this event. Get good project managers and event coordinators to take on the workload and stress.

The future of your marriage is far more important than your wedding weekend!