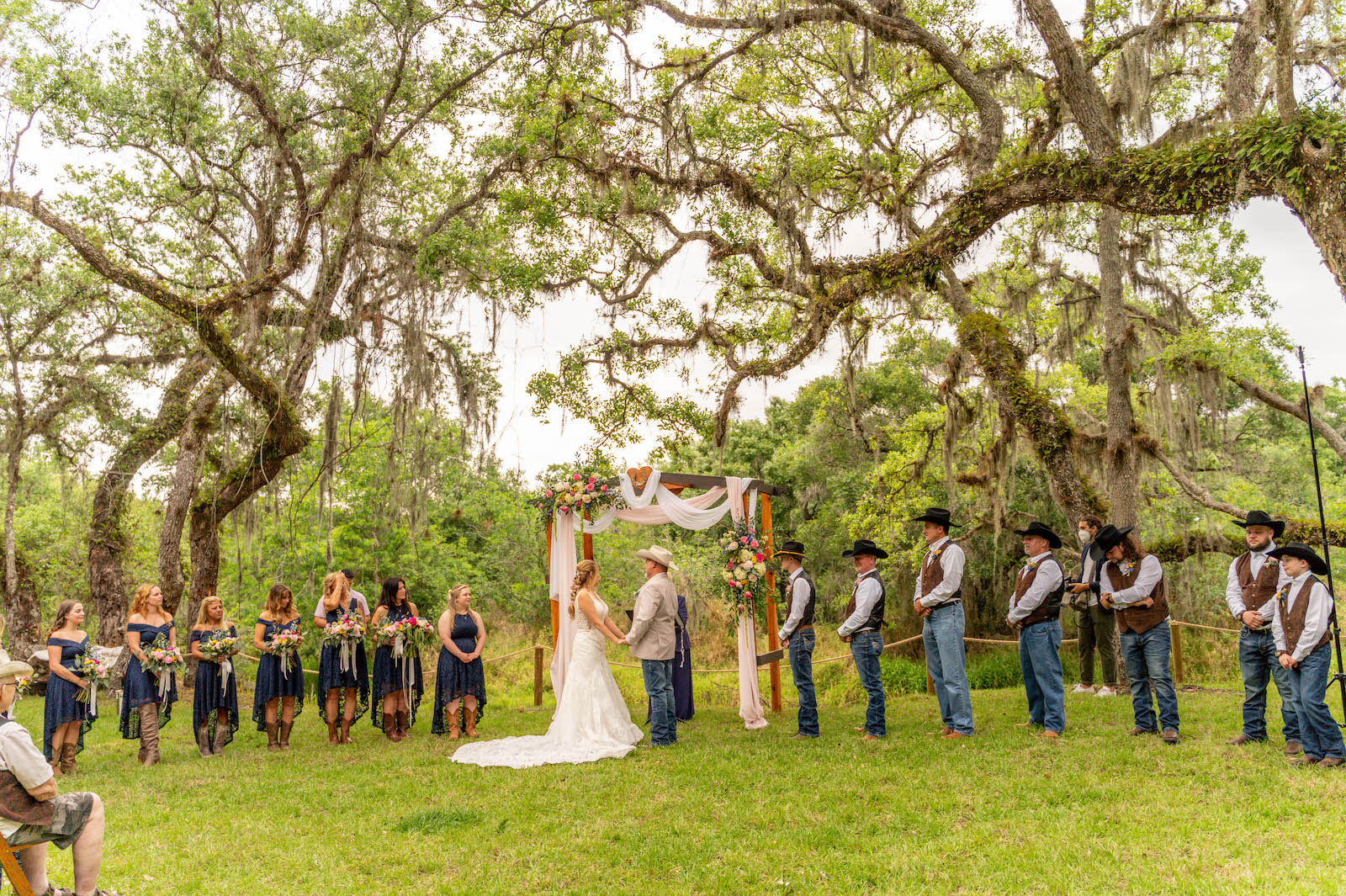 Angela and Gary's rustic backyard Sarasota wedding featured romantic shades of pink, the bride's favorite peony and ranunculus flowers, and a true cause for celebration with their 300 closest friends and family members.

“We wanted an outdoor country-themed wedding. We had the perfect place to have it, and it was very fitting for where we were and the style we both love,” the bride shared. “I chose bright pink and light pink with some light blue and greenery for my flowers. The bridesmaids all wore navy blue. I chose these colors because pink is my favorite color, and I liked the way the navy blue looked with my flowers.”

Angela was diagnosed with congestive heart failure and cardiomyopathy, and three months before meeting Gary, she was told that she needed a heart transplant. Although she no intentions of getting married again, Anglea decided to make the most of life and joined the online dating site Plenty of Fish.

While leaving their first date, Angela was distracted looking at her phone and rear-ended Gary with her SUV. Instead of getting upset about the fender bender, Gary asked Angela to roll down her window, leaned in, kissed her, and with a smile said, “Now, you will never forget our first kiss!”

With the future of Angela's health uncertain, Gary, a single father with a special need’s child, stood by her side and then had medical issues of his own after being involved in a serious motorcycle accident that resulted in eight broken bones and severe tissue damage.

The Myakka couple's wedding was truly a bucket-list item, a meaningful cause for celebration after Angela's near-2-year battle with heart failure and cardiomyopothy that left her in desperate need of a heart transplant. In the nick of time, right before Christmas, Angela received the gift of life and underwent surgery to receive a donated heart.

“What made our wedding unique was the venue, me being a former LVAD patient and a heart transplant recipient/survivor. I had my heart transplant donor's son walking me down the aisle,” the bride revealed. “Plus the large amount of military presence at our wedding, along with our Leathernecks motorcycle club brothers and sisters there supporting us.”

The groom transformed the couple's property with a labor of love to host the couple's nuptials. Gary handmade a majority of the wood décor elements for the celebration, including the ceremony arbor and walkway, the band stage, as well as the head table and pergola.

“Our Cabin On The Myakka had all the details and touches we wanted for our wedding because Gary made sure to make it that way. He wanted to give me a dream wedding and that is what he did.  What started out as a dirt backyard turned into a beautiful oasis and a perfect place for a wedding,” Angela beamed. “Gary knows I have a thing for hearts so he made wooden hearts to go on the arbor and the head table that he made.”

Angela cherishes several special memories from their celebration, but some of the most treasured moments included a few noteworthy speeches as well as special dances with the bride and groom's parents.

“My top memories are a tie between two moments: my heart donor's son (who we now consider family and a son to us) walked me down the aisle alongside my stepfather and the best man speech given by my stepson. His speech was so beautiful and touched my and Gary's heart so much. The speeches from my daughter-in-law's as well as one of Gary's good friends were favorites, too,” Angela reminisced. “My father-daughter dance with my stepfather was a beautiful moment. Watching Gary's mother-son dance with his stepmom and my mother was the most beautiful moment to see him and the two women who love and support him most in this world being able to have that dance together on our wedding day.”

The Proposal:
We were at our home, and it was the 4-year anniversary of my heart transplant.

Which vendors really exceeded your expectations and how?
Beneva Flowers donated our flowers, and there was definitely a part of me that thought it was possible they may not be as nice because it was a donation, and we weren't paying for them. But, that was not the case at all! They went above and beyond anything I could have ever expected. Our flowers were so beautiful and perfect in every way. There is nothing I would've changed about what they did. They do an amazing job and are clearly very generous.

Where did you spend your honeymoon?
We wanted to go to Portugal and a trip to Sweden, but, Covid. So for now we will go to Cancun and do our trip to Portugal and Sweden when we are able to do so. We chose those locations because we would like to see and explore where our ancestors are from.

How would you describe your theme/wedding design inspiration?
We wanted an outdoor country-themed wedding. We had the perfect place to have it, and it was very fitting for where we were and the style we both love.

What were your colors?
I chose bright pink and light pink with some light blue and greenery for my flowers. The bridesmaids all wore navy blue. I chose these colors because pink is my favorite color, and I liked the way the navy blue looked with my flowers.

Where did you host your bachelorette party?
My bachelorette party was at SandBar Tiki and Grille in Englewood, FL. This location was chosen because the band that was playing at the wedding was going to be there.

How did you incorporate your personalities into the wedding?
Gary knows I have a thing for hearts so he made wooden hearts to go on the arbor and the head table that he made. I also love pink, so there was a lot of pink. We bought all the younger girls that were attending the wedding little fairy dresses and wings so we could have beautiful fairies running around all night. I love peonies and ranunculus so those were the flowers we chose. Gary designed and made the stage for the band, the arbor we were married under, the pergola the head table was under, the head table, and the walkway. Gary (a military veteran) had a huge 20X30 American flag hung at the venue.

What advice would you give to other Sarasota couples?
Always see the best in each other and always be supportive of one another. Make sure you truly are ready to support each other through sickness and health because it could become a reality for you. Love each other more than your need to be right.

Quotes have been lightly edited for clarity and brevity.

*Preferred Marry Me Tampa Bay Wedding Pros are highly respected by our local wedding community and have been personally vetted by our editor.